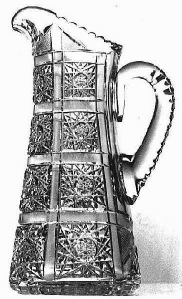 Glass making was one of the famed five Black Arts in our area. One of the best-known glass factories, the Greenpoint Glass Works, was located on Commercial Street. Founded about 1852 by Christian Dorflinger (1828-1915), an immigrant from France, his first factory was built on Concord Street. Within six years, the business had prospered to the point where he had two large factories, one on Concord and Prince Streets and a larger one on Plymouth Street. Benefiting from a rapid industry-wide growth between 1856 and 1860, Dorflinger again expanded his now sizable interests and erected a new factory on Commercial Street in Greenpoint. Named the Greenpoint Glass Works, this factory was larger than his other two and also enjoyed a waterfront location with docking facilities. Because this area of Greenpoint was sparsely developed, Dorflinger also built housing near the factory for his workers, many of whom were also French.

By the 1860s, Dorflinger was so successful that the annual output of his factories was valued at $300,000, and the quality of his glass was so highly regarded that Mary Todd Lincoln commissioned the Greenpoint firm to produce table settings for the White House. Dorflinger’s health began to fail and after selling the Plymouth Street factory, he retired to a farm in White Mills, Pennsylvania, in 1863. The Greenpoint works were eventually leased to two of his former employees, Jean B. Dobbelmann who lived on Dupont Street and Nathaniel S. Bailey, a trustee and vice-president of the Greenpoint Savings Bank who lived at 100 Kent Street. By 1875, the factory was held by John N. Sibell and in 1882 it came into the possession of the Elliot P; Gleason Manufacturing Co., but it was still known as the Greenpoint Glass Works. In 1902, the firm became the Gleason-Tiebout Co. and produced lamps and bulbs only. Gleason-Tiebout continued its operations in Greenpoint until 1946 when it moved across Newtown Creek to Queens