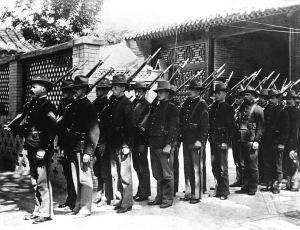 Generally when the United States Marine Corps fights I support them. There was one fight, however, when I would have supported their foes. In December of 1869 The Vinegar Hill area of Brooklyn was home to numerous Irish moonshiners who were avoiding paying excise tax on the whiskey they produced. When the Civil War ended, the killjoys in the Federal government began to crack down on the Irish “moonshiners” of Brooklyn, sending in uniformed troops stationed in the Brooklyn Navy Yard to assist revenue officers as they dismantled illegal distilleries. During the 1869 incident, the residents of the neighborhood fought back at the army, throwing bricks and rocks at the soldiers as chaos descended on the neighborhood. The Marines came into combat with the local Irish street gang of the area, Velvet Caps of Irishtown, a local gang that protected the distillery owners. The gang was famous for wearing skin tight pants, like real “dudes” of the era, with blue shirts and caps made obviously of velvet. They found out the Marines were on the way and took a large still, attempting to throw it into the East River until the siege was over. The Marines caught up to them however and a terrible fight ensued for which they had neither the weapons or the numbers the Marines did. A poem was written by one Johnny Manning, an Irishtown bard and “the leading literary genius of Irishtown.”

“The first place that was taken was in Little Water Street,
The Dutchmen with their axes were a fearful crowd of beats,
They dragged a still out carelessly and threw it on the ground,
Saying ‘Soldiers, watch those Velvet Caps, they’re the boys of Irishtown.’”
(The “Dutchmen” were the Marines under Revenue Officer Silas B. Dutcher)
Finally, the troops were forced to fix their bayonets in order to escape the angry mob that had developed around them as they were pouring whiskey mash in the streets, retreating back to the Navy Yard with 13 stills.

These raids would continue in the next two years, and finally ended after a revenue officer was shot and killed by one of the bootleggers, perhaps the only IRS agent ever killed in the line of duty in American History.