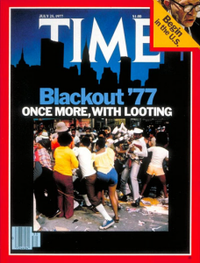 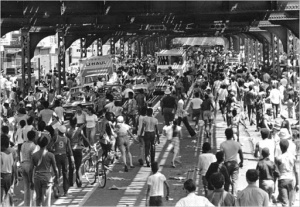 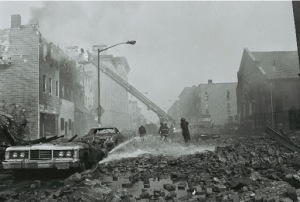 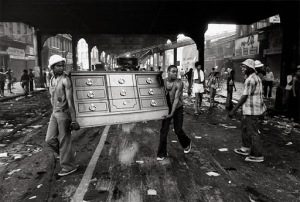 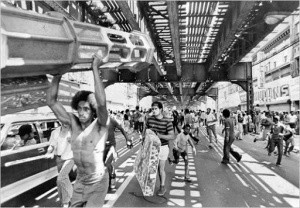 The 1977 New York City Blackout enabled such widespread looting and arson that it marked this event as one of the lowest points in city history, Bushwick was so badly devastated that it took decades to heal its wounds, which were still visible decades later. The looting and arson that occurred became emblematic of urban decline and many residents still have bitter memories of what happened during the blackout and the rest of that summer. The blackout lasted only from 9:34 p.m. on July 13 to 10:39 p.m. on July 14, but the effects of the power outage were massive. Citywide A thousand fires were reported, sixteen hundred stores were damaged in looting and rioting and three thousand seven hundred people people were arrested, most of them for looting. The authorities later estimated that the total cost of the blackout exceeded $300 million.

The summer of 1977 has become legendary in the city’s consciousness.It was a time when the city seemed to be spinning out of control. Crime was rampant and people feared to go to some areas of the city, even in daytime. The police were searching for the serial killer known as the Son of Sam who host young people parked in Lovers’ lanes: the Yankees made the stadium infamous as” the Bronx Zoo” and went to the World Series despite a clubhouse feud; Edward I. Koch, Mario M. Cuomo and Abraham D. Beame fought their way through a fractious Democratic mayoral primary.

Bushwick in the summer of 1977 was a quiet area few people outside of Brooklyn knew much about. The community was founded long ago in the seventeenth century as a village in the woods whose first inhabitants were Huguenot farmers. By the 1830s, Bushwick had begun to lose its rural character. It became an early industrial center and Germans set up a number of breweries and other businesses there, attracting other Germans, and later Italians . The newcomers steadily built up Bushwick; densely packed two- and three-family homes came to line its streets, interspersed with retail strips and a smattering of warehouses and factories. Beer barons and factory owners even erected elegant mansions on Bushwick Avenue and a few other streets.

Bushwick’s decline began in the mid-1960s, as African Americans and Puerto Rican immigrants surged into the area causing white flight to the suburbs. As race riots ripped apart other cities, including Detroit and Newark, unscrupulous real-estate agents and speculators tried to frighten white Bushwick residents—a practice known as “blockbusting.” Homeowners would find ominous messages in their mailboxes—“Don’t wait until it’s too late!”—as well as encouraging ones: “Houses wanted, cash waiting.” In a massive scandal reminiscent of today’s subprime-mortgage meltdown, speculators bought homes from Bushwick residents for an average of $8,000 apiece, and then, using fraudulent appraisals and a Great Society federal mortgage program that insured home loans to low-income buyers, sold them to poor blacks and Puerto Ricans at prices that they couldn’t afford— on average, about $20,000 per home. Many defaulted, abandoning their homes and massively depressing local property values. By 1972, in one city estimate, some 500 Bushwick buildings stood empty because of the bad loans; others, not part of the federal program, also emptied as housing prices plummeted and buyers balked at investing in the neighborhood.

A big reason they balked was rising crime, especially arson. To collect on fire insurance, unscurpulous owners began torching their own empty buildings; gangs set fire to abandoned buildings, too, and then waited for the fire department to do the hard work of knocking down walls and floors, making valuable fixtures and copper wiring easier to steal. By the early seventies, infernos blazed nightly. The neighborhood’s wooden row houses, tightly packed together and often sharing attics, proved particularly vulnerable; a fire would erupt in one building and swiftly spread, sometimes consuming half a block. At bedtime, residents began dressing children in street clothes instead of pajamas so that they could make a quick escape from late-night fires. Men living near abandoned homes began sleeping on porches, guns by their sides, ready to drive off arsonists.

Bushwick residents tried to save the neighborhood by forming block patrols and anti-blockbusting campaigns, but Mayor John Lindsay’s administration made this a fight in vain by raising rental subsidies for welfare recipients, which encouraged Bushwick landlords to fill vacant units with welfare recipients, since they now brought higher rents than ordinary tenants would pay on the open market. By the mid-seventies, half of Bushwick’s residents were on public assistance. After discovering that the city also paid generous relocation costs if fires displaced them, the welfare tenants began setting their own government-subsidized apartments ablaze. Investigators arrested one local welfare family that had collected $40,000 from the city for 13 fires that it set. Nor were firebugs the only problem. Crime in general in Bushwick soared 50 percent during the first half of the seventies, with burglaries and robberies leading the way, increasing to nearly 8,500 per year—up from 4,500 in 1971.

Bushwick was steadily descending into chaos and was becoming an urban jungle. Although it didn’t explode until that fateful July night, all the elements were in place for the ugly scenes of the blackout. Bushwick burst into national headlines on the evening of July 13, 1977, when a massive blackout plunged New York into darkness. Within minutes, hundreds of residents began assembling in Bushwick’s streets, chanting “Broadway, Broadway,” before marching off to that street, the area’s main shopping district. As the mob arrived, someone drove a car through a sporting-goods store’s iron security gates. Frenzy ensued. Some looters tore away more iron gates, shattered store windows, and carted away anything they could carry. Others hustled off to find trucks, vans, and cars, and then returned to load them with stolen goods. “People were running around crazy like a pack of wild dogs,” a looter told the authors of Blackout Looting!, a study of that unhappy night. Morris Todash showed up at his small storefront to assess the damage and noticed that the furniture outlet next door, protected by iron gates, remained undamaged. “Suddenly, I heard a buzzing in the streets, like a hive of bees, and I looked outside and saw a crowd of several hundred people gathering,” says Todash. “Someone drove up with a truck and hooked a chain around the gates of the furniture store, then used the truck to pull them off. I decided to get out of there because there was no one to protect you.” one hundred and thirty four businesses were looted and forty-four were burned to the ground.

Broadway was devastated. Many owners of looted businesses decided never to return. Broadway had a forty-three percent vacancy rate. After a decade of disorder, Bushwick had hit bottom—whole blocks were now abandoned and destroyed. On some streets, the only thing left standing was the local church. Many left the area for good. The looting made the covers of National magazines like Time.

It would seem that things could not get any worse for the beleaguered neighborhood, but they did. On July 18 1977, a giant fire burned out the heart of Bushwick. It was one of the biggest fires that FDNY ever fought. It started at the corner of Knickerbocker Avenue and Bleecker Street in an old abandoned knitting factory. It was set by three teenagers, who were later charged with reckless endangerment, third degree assault and arson, and sentenced to 25 years in prison.

It was like many other fires that occurred during the firestorm years of Bushwick, except for the old tank of Kerosene in the basement. When it exploded, a fireball exploded out of the building. It took about 3 to 5 hours for 55 units of firefighters from Manhattan, Queens, and Brooklyn to put out the fire. The fire hydrants were no use to the firefighters because they were low on water.
It turned out that the citizens throughout the summer kept on using the hydrants to fight off the heat. The firefighters also were low on equipment because of the low budget the department received. Many citizens were affected by the fire. 65 families lost their homes and about 23 buildings were destroyed, as well as 50 people injured, including firefighters.

This fire was important to Bushwick because many homes were lost and it showed how dangerous leaving abandoned buildings could be. It was also important to the rebuilding of Bushwick. The empty space left by the fire is now the location of the 83rd precinct.

It would take thirty years before the area began to recover, but today Bushwick is experiencing a huge revival and it is a hotspot for culture and creativity.