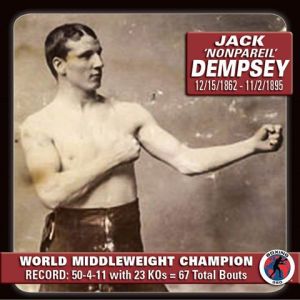 Most fight fans know the name of Jack Dempsey, but few know that the world heavyweight champion from 1919 to 1926 actually took his name from an earlier  Greenpoint middleweight world champion boxer named Jack Dempsey, who was later  called non-pareil to differentiate the two boxers.  The Non-Pareil was one of the first great scientific boxers and is still considered one of the greatest who ever fought.

Jack Dempsey was born near the Curragh in County Kildare Ireland on December 15, 1862, and his parents brought him to New York.  Little is known of his early career in those tough, bare-knuckle day. He was born with the surname of kelly, but his father died and he took the name of his stepfather Dempsey.  In a Brooklyn Daily Eagle Old TImers column one Greenpointer remembered that Demspey’s mother raised dairy cows in Greenpoint and young Jack sold their milk. Later, he would get a job in a Williamsburg barrel factory where he became good friends with another Irish born boxing champion, Jack McCauliffe. They were often each other’s corner men and Dempsey taught the undefeated McCauliffe much about boxing.

Dempsey started fighting as a lightweight and eventually won the first  Middleweight Championship of the World even though he never weighed more than a welterweight during his entire career. He often defeated far heavier boxers.

Dempsey was not the typical pugilist. He was handsome, well-spoken and mannerly. Dempsey also  was personable and made friends easily. On most occasions, after trouncing an opponent in the ring, he was calm and rather indifferent towards the praise being heaped upon him. A man of sterling honesty and gentlemanly bearing in that raw pioneer period, when good qualities were at a premium, could not fail to elicit a grudging word of praise even from those who sampled the dead accuracy of his flashing hands.

Perhaps his greatest weakness as a fighter was his inclination to consume too much alcohol and to underestimate his opposition. The result was that sometimes he did not train well. However, his great skills usually overcame these problems.

Physically, Jack was slender, muscular, quick and agile. He had fast hands and a stiff right hand punch. He was crafty and elusive and utilized feints accompanied by a sharp, accurate left jab . Dempsey was a  boxer who  brought polished boxing skill … and an appreciation of the finer points of ringmanship to the modern ring.  He was a master of strategy who opened a new chapter in ring-craft with his powerful arms and restless, slender legs. Fight after fight, his opponents were battered, bruised, and cut up while he scarcely had any marks at all.One hundred and fifty-eight pounds of strength, strategy, grace and chivalry speedily won him the flattering title of “The Non pareil” of the ring. His uncanny skill and unquestionable pluck could only be really appreciated when this grey-eyed wizard with the light brown, wavy hair was pitted against some fierce cave man battling with desperate ferocity. Boxing historian  Nat Fleischer  tells the story of a private fight Jack had with a six-footer who was much larger and heavier than Jack. Fleischer says Jack was “…cat quick” and danced around the man “…poking him every once in a while with that wonderful left” until he wore him out.

The good looking young Irishman easily became an idol of the boxing public.He was hailed as champion even before he met and defeated George Fulljames and officially became one. Dempsey fought the Toronto boy on July 30, 1884, at Far Rockway, just outside New York, and the Canadian went down and out in the 22nd round. The Champions during an unbroken series of victories, handed a sleeping draught to La Blanche at Larchmont, Long Island, on March 4th, 1886. La Blanche who was later to prove the Nemesis of his conqueror, was four years Dempsey’s senior and a great fighter. He took the quietus in the 13th round.
The battling Irishman took part in many unique contests, but strangest of all was his encounter with Johnny Regan on December 13th, 1887. This meeting was the climax of much ill-advised bitterness between the backers of both camps. The ring was the dock of an old barge in Long Island Sound, and the test was a fight to a finish with the bare knuckles. Truly it was a battle of primitive man but it is well to remember that the “kid glove” era of boxing was merely at its birth. The rounds were not yet set to time and a “knock down” replaced the gong. Knuckles flashed for a solid hour. Fourteen rounds had been fought under London Prize Ring rules when the barge, which had been securely moored to two stakes, was partly submerged by the tide. The strange “ring” was cut loose and towed out into the Sound. Both the principals were about to resume when a squall struck the “ring” and a heavy snow shower covered the slippery deck. A truce was called and the party went ashore. Someone suddenly remembered an old boat house about 20 miles away and a heavy trudge through the driving snow brought the small body to more cheerful surroundings. An obliging landlord, some hot drinks, and the men were soon trading punches with the onlookers sitting on the bar and shouting advice between drinks. Another sixteen rounds and almost an hour of furious fighting were marked when word came that two policemen were down the road. Disdaining heavier clothing the fighters plunged into the woods and their followers found a clearing amid the snow. Here Dempsey and Regan fought to a finish. In the 45th round the referee cried “Time,” but Regan was unable to continue. It was the end of over four hours of heavy punching with almost anything allowed except biting and kicking. No doubt some our present-day champions would look rather sheepishly at the prospect of a four-hour “mix-up” with a twenty mile walk for a “breather.”

Dempsey  was unbeaten until 1889 – when he lost for the first time on an “illegal” punch – a backhand (or elbow) delivered by LaBlanche while fighting at close quarters. Dempsey was winning the fight when  LaBlanche turned his back to the champion.  suddenly,  A whirlwind right connected with Dempsey’s chin and the pivot punch had landed. The Nonpareil sagged at the knees and dropped. He was out. The crowd gasped as the referee reluctantly awarded the laurels to the victor. La Blanche won the championship but lost his reputation. Since that fateful August night the pivot-punch has never again been tolerated in the ring. Dempsey challenged Lablanche to a rematch, but Lablanche never wanted to fight a rematch.

On Spetember 6, 1892 three North Brooklyn fighters all named Jack took part in a boxing carnival, Dempsey, McCauliffe and Jack Skelly, a lightweight. Dempsey was defeated by Bob Fitzsimmons after sixty victories in the ring. Fitzsimmons is one of the greatest fighters ever in his weight class.

The fight, “looked upon as one of the greatest ever made” according to the St. Paul Globe, drew sports from every corner of the country. Fitzsimmons entered the ring first, weighing in at between 151 and 155 lbs. Some reports have him weighing in at 155 lbs. and being required to work off a single pound to make the then middleweight limit of 154 lbs, but the most widely reported figure is 151 lbs. Dempsey was only slightly smaller on paper weighing in at 147½ lbs , but a size difference was almost universally remarked upon.

The first round was the only competitive round of the fight. They swapped punches but Fitzsimmons immediately began to crowd Dempsey, using his superior physicality to corner the smaller man and land before darting out and rushing once more. Dempsey feinted and clinched three times in quick succession as Fitz led. Dempsey “returned with heavy body blows”, but Fitzsimmons was unaffected.

By the end of the second Dempsey was showing signs of distress and in the third he was dropped for the first time, hurt by a left uppercut, then smashed to the canvas by a right hand, a punch that may also have broken Dempsey’s nose. A key blow for Fitzsimmons, he would land the left uppercut over and again throughout the fight. By the sixth, Dempsey was in desperate trouble and forced to trade with his rangier opponent but was repeatedly hurt by Fitz’s punches. “Jack constantly clinched to save himself…hot fighting followed. Jack seemed groggy at the end of the round.”

“After receiving a right and left Dempsey fell against the ropes in a sitting posture, his hands hanging helplessly at his sides. Fitz declined to hit him in that position. After standing, Dempsey hit to the body, but his punches had no effect…Dempsey [was] barely able to keep his feet.” it ended in the thirteenth round.  His friend Skelly suffered an even worse beating in the ring and witnesses said it was brutal to watch Skelly have his dace disfigured in the ring. Only McCauliffe of the three Brooklyn Jacks emerged victorious.

Dempsey’s life would be cut short by tuberculosis. He died in 1895 aged thirty-three. he died in Portland, Oregon in poverty. His grave was unmarked.  Some say that a poem written on his grave is the greatest elegy ever written for a boxer.

Far out in the wilds of Oregon
On a lonely mountain side
Where Columbia’s mighty waters
Fell down to the ocean’s tide,
Where the giant fir and cedar
Are imaged in the wave
O’ergrown with weeds and lichens,
I found Jack Dempsey’s grave

I found no marble monolith
No broken shaft or stone
To tell of the great triumphs
This vanished hero won;
No rose, no shamrock I could find,
No mortals here to tell,
How sleeps in this forsaken spot
The immortal Nonpareil

A wind rock-strewn canyon road,
That mortals seldom tread,
Leads up this lonely mountain
To the bivouac of the dead.
And the western sun was sinking
In the Pacific’s golden waves
And solemn pines kept watching
O’er poor Jack Dempsey’s grave

Forgotten by ten thousand throats
That thundered his acclaim;
Forgotten by his friends and foes
Who cheered his very name
Oblivion wraps his faded form
But ages hence shall save
The memory of that Irish lad
That sleeps in Dempsey’s grave

Oh! Fame, why sleeps thy favoured son
In wilds, woods and weeds?
And shall he ever thus sleep on
Interred his valiant deeds?
‘Tis strange New York should thus forget
Its “Bravest of the Brave”
And in the wilds of Oregon
Unmarked, leave Dempsey’s grave
Val O’Grady