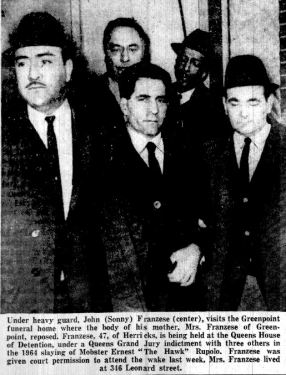 John “Sonny” Franseze, the man in the  Greenpoint Star picture, was being temporarily let out of prison in 1967  for his mother’s funeral. He grew up at #346 Leonard Street here in Greenpoint and became one of the most feared mafiosi in New York. He is still alive and in prison at age ninety-seven. Franseze  is  reputed to have killed sixty men and arguably, Franzese has been famous as the current oldest active member of the American Mafia. He was ruthless. Federal Prosecutors allege  he also recommended that the best way to dispose of body parts was to dry them out with a microwave and grind them up in a garbage disposal. Franzese once  observed:

“Today, you can’t have a body no more…It’s better to take that half-an-hour, an hour, to get rid of the body than it is to leave the body on the street.”

He was arrested in the racketeering case in 2008 and was later freed on $1 million bail.

He was born to Carmine “The Lion” Franzese and Maria Corvola, although his birth year is a source of confusion. Federal prison records say that he was born February 6, 1917. However, his son Michael Franzese says that his father was actually born in 1919. In the late 1930s Franzese joined the Profaci crime family (later named the Colombo crime family) under boss Joe Profaci. Franzese bore a close physical resemblance to boxer Rocky Marciano, one of his friends. His first arrest came in 1938, for assault. In 1942, in the midst of World War II, he was discharged from the United States Army because he displayed ‘”homicidal tendencies” Although never being arrested for it, court papers accused him of committing rape in 1947.

Franzese operated out of New York City and New Jersey and was involved in racketeering, fraud, and loansharking. He is believed to have been elevated to caporegime or captain in the Colombo family in the mid 1950s and by 1964 he had been promoted to underboss. In 1966, Franzese was able to avoid a conviction for murdering a rival and dumping the body into a bay.

In 1967, Franzese gained a financial interest in a new recording company, Buddha Records. The company became quite successful, recordings hits for acts such as Melanie Safka, the Isley Brothers, and Curtis Mayfield. Franzese used Buddha to launder illegal mob earnings and to bribe disc jockies with payola.

Some claim that he is the mobster who invented the “mob kiss.” It all started when John “Sonny” Franzese and Joey Brancato, both big guys in the Colombo outfit, bumped into each other one day on the corner of Lorimer Street and Metropolitan Avenue in Greenpoint, which is in Brooklyn, and they kissed each other on the cheeks. The only thing anybody on Metropolitan Avenue knew was that they had never seen it done before. The moment the men kissed, it became a street rule. This was at least fifty years ago. Immediately they were doing it on 101st Avenue in Ozone Park and Cross Bay Boulevard in Howard Beach. Soon even legitimate citizens were doing it.