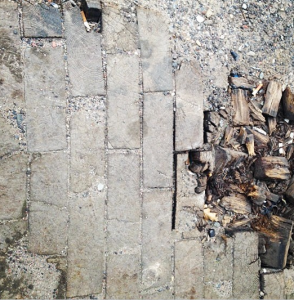 I just got back from West Street. The last wooden sidewalk in New York was in front of the old American Hemp Rope Company factory on the south side of the street. It seems that they have paved it and the wood blocks are in a pile with other debris. Sad, because it is a piece of New York city history gone.

The image above is an older image of what the sidewalk was once like.