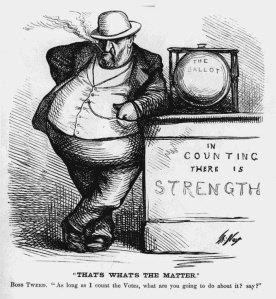 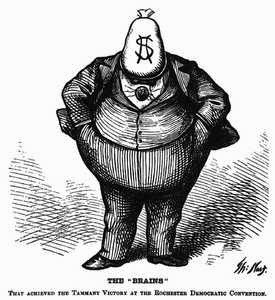 Tammany Hall was a powerful, but corrupt political machine that ran New York for decades.

It was the Democratic Party political machine that played a major role in controlling New York City and New York State politics and helping immigrants, most notably the Irish, rise up in American politics from the 1790s to the 1960s. It controlled Democratic Party nominations and political patronage in Manhattan from the mayoral victory of Fernando Wood in 1854 through the election of John P. O’Brien in 1932. Frequently its leadership was identical to the Executive Committee of the local Democratic party, and it was a major or controlling faction in the party in 1821-1872 and 1905-1932.

Key Tammany bosses through the years included William M. Tweed, Richard F. Croker, and Charles F. Murray. Tweed was convicted for stealing an amount estimated by an aldermen’s committee in 1877 at between $25 million and $45 million from New York City taxpayers through political corruption, although later estimates ranged as high as $200 million. Tammany Grand Sachems often left office as millionaires.
In 1931 the Hoffstadter Commission investigated Tammmany Corruption. Tammany’s man in Greenpoint, John McQuaid, had a half million dollars in a bank account that he could not explain in a time when the average worker might bring home fifty dollars a week.

How did the machine attract votes for so many generations when people knew how corrupt it was? Betty Smith depicts a conversation in her novel that shows why men voted for Tammany. Her protagonist, Francie Nolan, a child recalled election night. She got in line with her hands on the shoulders of the child in front of her and they snake danced through the streets singing

Smith described a typical conversation Brooklyn voters would have had about Tammany. Francie’s father Johnny was an Irish American Brooklyn Democrat who debated Tammany with his skeptical wife. She still could not vote at the turn of the century.

Johnny said” By and large the party does a lot of good for the people. ” All they want is a vote from the man of the family and look what they give him in exchange.” His wife asked what skeptically and he replied.” Well you need advice on a legal matter. You don’t go to a lawyer. Just ask your assemblyman. ‘

He added. “ They may be dumb in many ways, but they know the city’s statutes backwards and forwards.“

” Take Civil Service. They know when the examination for cops, firemen or letter carriers are coming up. They’ll always put a voter wise if interested.” The mother protested that one of the neighbors took the test without getting a job. Johnnie answered. “Ah That’s because he is a Republican. If he was a Democrat, they’d make his name and put it at the top of the list. I heard about a teacher who wanted to be transferred to another school. Tammany fixed it up.”

Johnny continued,. “Look at all the jobs they get for Voters.” You know how they get them, don’t you? They inspect a factory and overlook the fact that they’re violating the factory laws. Naturally, the boos pays back by letting them know when they need men and Tammany gets the credit for finding the jobs.”

Her father continued,” A man has relatives in the old country but he can’t get them over here on account of a lot of red tape. Well Tammany can fix that up.” “ Sure they get them foreigners here and see to it that they start in on their citizenship papers and then tell them that they must vote the democratic ticket or go back where they came from.”

Johnny finished up explaining how Tammany helped the poor.” No matter what you say Tammany is good to the poor people. Say a man’s been sick and can’t pay his rent. Do you think the organization would let the landlord dispossess him? No sir. Not if he is a Democrat.”
‘
His wife replied” For what Tammany gives to the people it takes from them double. You wait until us women vote. You don’t believe we will. The day will come, mark my words. We’ll put all those crooked politicians where they belong- behind iron bars. “